Newly anointed MVP Jen Kuntz, of Kuntz Consulting Inc. has a new blog post up where she discusses what the launch of Dynamics 365 means for Microsoft Dynamics GP and the rumours which have been springing up.

Unfortunately, some of these rumours seem to be coming from Microsoft partners themselves.

I was at the reIMAGINE Dynamics GP partner conference earlier this year, where Errol Schoenfish, the Director of Product Marketing at Microsoft, reiterated, and got us to stand up and repeat along with him that “Microsoft Dynamics GP is going nowhere.

Microsoft then displayed a slide showing the continuing development of Dynamics GP (and NAV and AX and SL alongside Dynamics 365): 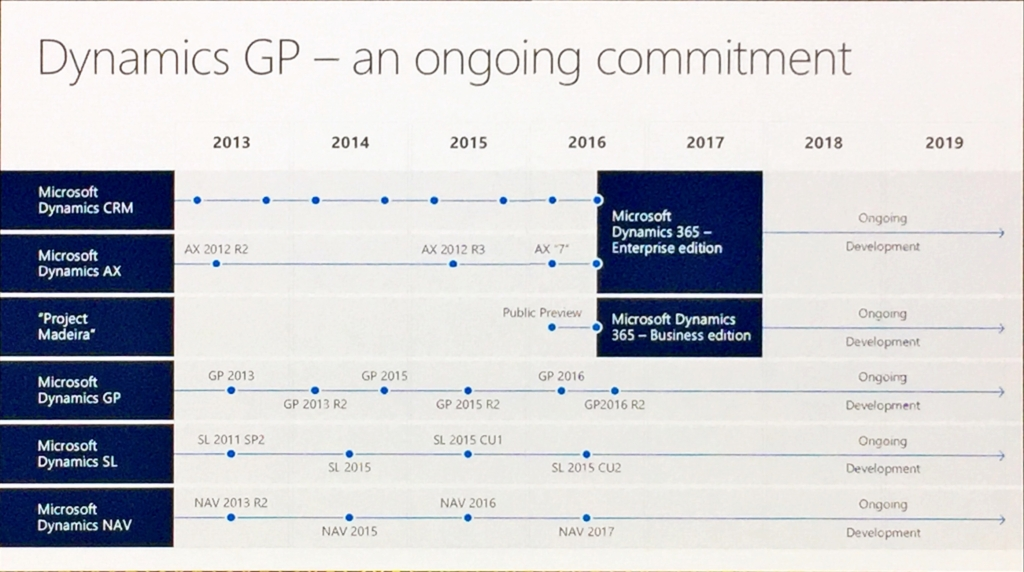 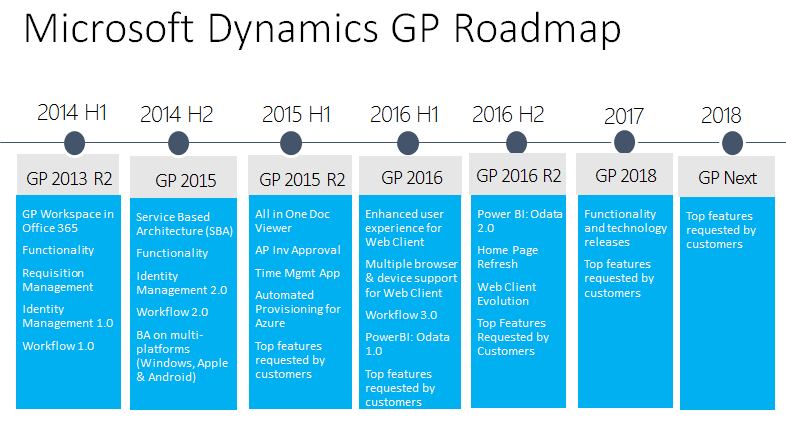 My reference to Project Green in the post title, was slightly tongue in cheek. Back in 2008, a merger of the Dynamics ERP was looked into briefly be Microsoft, before being discarded. That was Project Green.

It still comes up in conversations now; last year we had a prospect in who mentioned a competitor selling another ERP mentioning that GP would be merged with NAV. He stopped at that point when he saw my huge roll eyes, and confirmed it as Project Green when I asked. I then explained what it was and when it ended.

That’s the problem with rumours. When they start they can be difficult to stop. The message on Dynamics 365 from Microsoft hasn’t been great and needs to improve.

The fourth session was a short one, just before lunch. It was Deploying PowerGP by NvevityTo Go. In the session, Chris Dobkins showed the web portal they have created which allows Dynamics GP tenants to be deployed in 5 minutes. He showed that it did only take this long, by asking for someone in the audience to give him a company name which he then used to deploy the tenant and logged into it.

It was very impressive and sets a high bar for anyone looking to compete. The web portal they have is very slick and easy to use.

Very impressive work from John Lowther and others.

Looking at the 30 minute presentation/demo Chris did , Dynamics GP as a SaaS offering from partners looks eminently possible. There will be a huge amount of complexity behind the scenes making it all work correctly, but it is doable and gives the full functionality of an enterprise scale ERP.

The second session was one with somewhat controversial content, the Dynamics 365 for Consultants session. This session was opened by Errol Schoenfish and then handed over to Chad Sogge for the demonstration section. Dynamics 365 does look fairly swish, but I do wonder where we’d fit it our offerings.

Yes, the Cloud is not just coming, but is also here now. Dynamics 365 would appear to be pitched at the bottom end of the ERP market; a market which can be met by a hosted Dynamics GP implementation while Dynamics GP also retains it’s ability to scale upwards as required. Perfect Image has a client with over 250 concurrent users, and Njevity spoke of one with 400 plus concurrent users). It is viewed by some people as the next Office Accounting; remember that? Yeah, not many do.

At Perfect Image, we have a small number of clients who have gone for web client only implementations of Dynamics GP and I have been looking into providing what would basically be a SaaS (Software-as-a-Service) offering. It turns out there are US partners out there who are far ahead of us, not only in thoughts about it, but actually implementing it, such as Njevity. I am lead to believe MVP John Lowther was responsible for much of their work (more on this in the next post) along with their wider team.

So, while having a cloud offering is required, this is something which can be offered by partners using Dynamics GP, rather than taking on a functionality limited cloud only offering. At the moment, it is limited not only in functionality of features, but also in how it can be extended; it is a vary rare implementation which does not require some customisation or development of something somewhere; which you cannot do in D365.

The only way to add extra functionality is to write an app for it to Microsoft’s guidelines and publish it to the Dynamics 365 app store; I can’t see a single client paying for something which then ends up in an app store. I’d also expect Microsoft to reject the majority of this type of development as not being suitable as it would be too focussed on one clients needs.

I will be taking a more detailed look when Dynamics 365 launches in the UK.

It is also worth noting that while I mentioned Njevity above, there are other US partners who are in the clou space as well such as RoseASP and WatServe.