This means that critical security issues found will be fixed, but no feature enhancements or other bugs will be added or fixed. This does of course include changes to the VAT Daybook module which are very important to users in the UK with the ever changing requirements from HMRC for MTD.

If you are using Dynamics GP 2016, I would recommend contacting your partner to discuss an upgrade to a version under mainstream support. If you are in the UK it is important you do this as you will only get updates to the MTD functionality if you are on the latest build of Microsoft Dynamics GP and under the Modern Lifecycle policy.

For those clients with MTD requirements, but who, for whatever reason cannot upgrade at the moment, ISC have an add-on available for all versions of Microsoft Dynamics GP which will support the MTD submissions to HMRC. If you’d like to discuss requirements in this area, please use the contact form below. 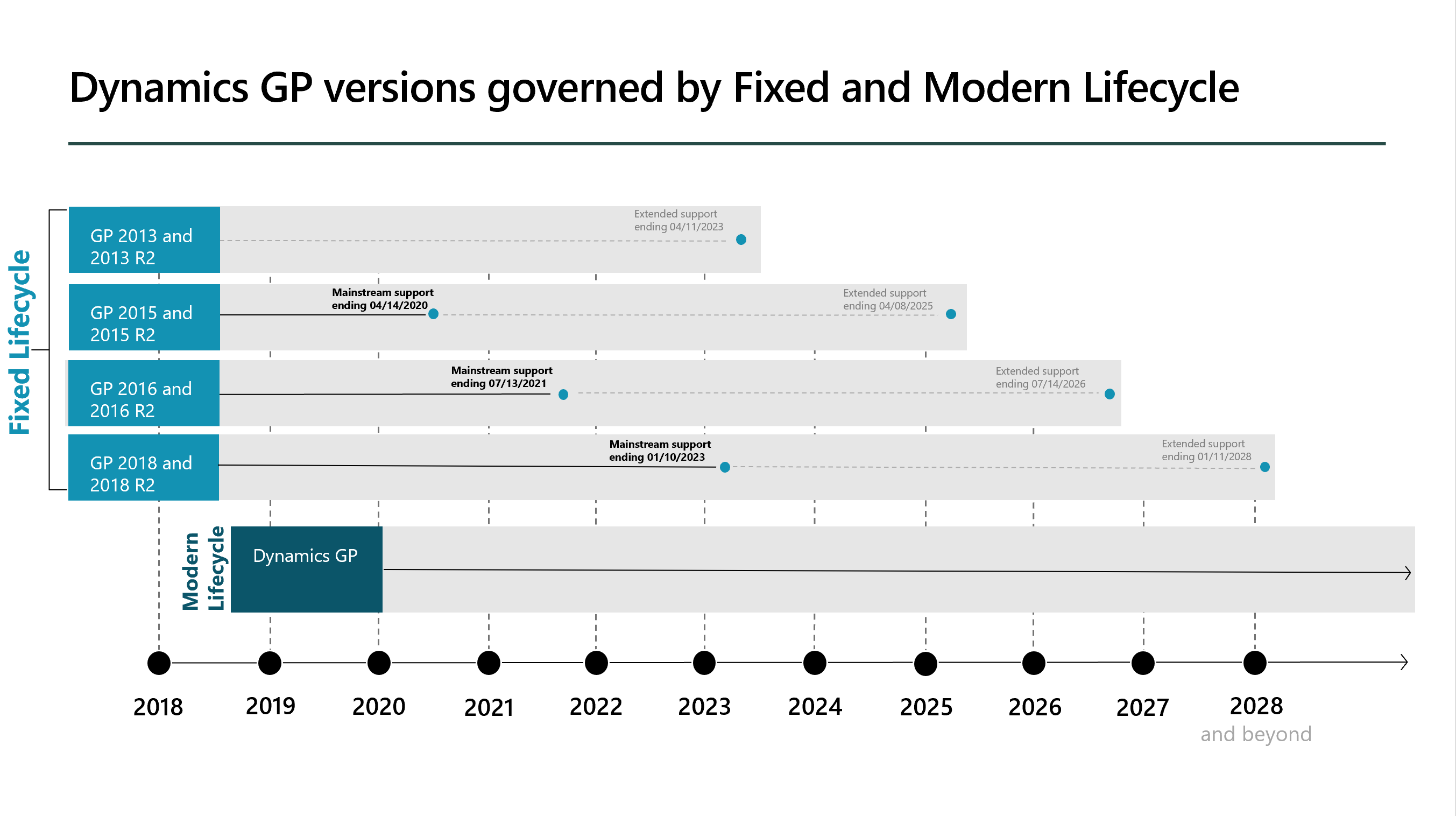 It worked fine in the desktop client which meant for regular issues for those clients operating a hybrid installation with a mix of desktop and web clients. It could also cause problems when doing a demo and someone asked to see it while I had the web client open rather than the desktop client.

My understanding was that this bug was fixed in 2016, which I was really looking forward to; I also have a large client who was looking forward to this being fixed as well so they could minimise the use of Integration Manager for importing journals.

Unfortunately, after installing 2016 I did a quick test and found that copy and paste still did not work. I asked around and found that Belinda Allen had the exact same issue, she had found the issue already before I asked, which confirmed that it was not confined to my system.

Belinda raised a call with Microsoft and they have confirmed that it is a reproducible bug which has been escalated to the development team to look into.

It would be nice to have a hotfix, but I am guessing that it will be in Dynamics GP 2016 R2 at the earliest.

This comes up every time we upgrade a client and I am tired of having to hunt out the posts from Microsoft, so I’m bringing together a list of the last few scripts and will add new ones here as each version is released.

The versions I could find again are listed below

In the last post we installed the feature in the desktop client for SBA; in this post I’m going to install the server components.

To do this, launch the Microsoft Dynamics GP 2016 setup utility and select Web Components: 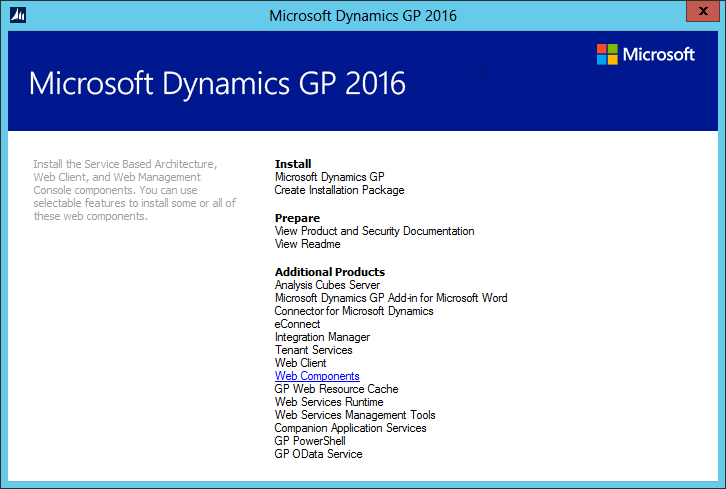 END_OF_DOCUMENT_TOKEN_TO_BE_REPLACED

The final additional product to install, is the Service Based Architecture. This is a relatively new addition for Dynamics GP which allows for interaction using REST based web services, rather than the more traditional SOAP based ones made available via the Web Services for Microsoft Dynamics GP.

There are two steps to installing Service Based Architecture (SBA), the first of which, install the SBA feature to the Dynamics GP client. This is the one which we will cover in this post; the next post will cover the second.

I am going to add this feature to the desktop client installation on my web server, so need to use the Programs and Features Control Panel applet. Once it is loaded, select Microsoft Dynamics GP and click Change: 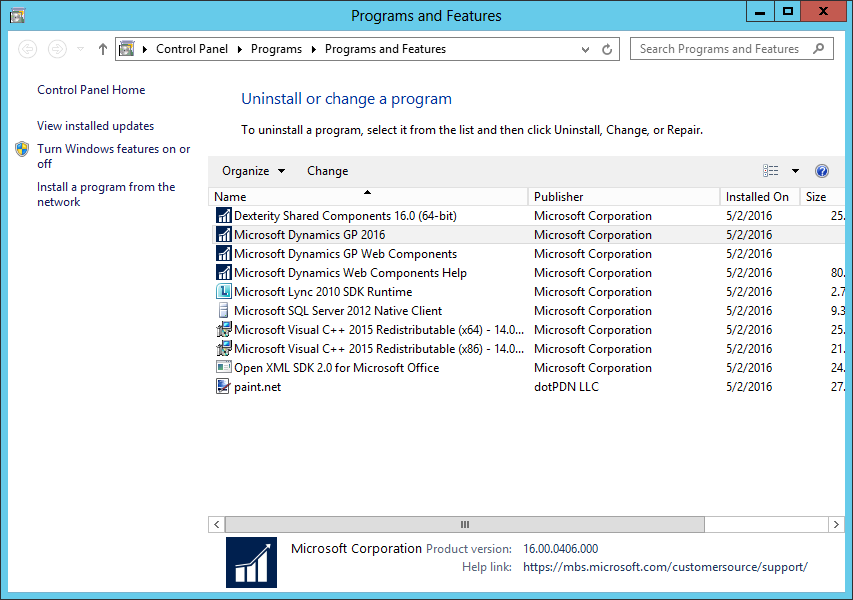 END_OF_DOCUMENT_TOKEN_TO_BE_REPLACED

The web resource cache is an optional component of the Microsoft Dynamics GP web client, but installing it on each session host machine is recommended as it will improve performance. 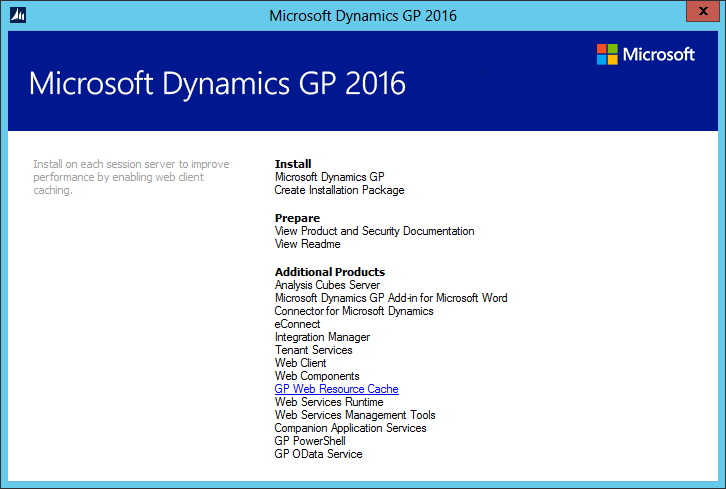 END_OF_DOCUMENT_TOKEN_TO_BE_REPLACED

In the last post, I showed the new HTML5 web client, but didn’t really give an opinion on how well I thought it worked.

Not having to install SilverLight on each PC or laptop which will run the web client is a definite plus; likewise it being cross platform and supported on Chrome, Safari and Firefox is another plus.

The HTML5 web client is also, in my opinion, quicker than the old SilverLight one.

However, there is one large negative which escaped me when doing initial testing and which Belinda Allen pointed out, although not on her blog, you can only have one open at a time; when you open a window the area pages are disabled, preventing you from opening another: 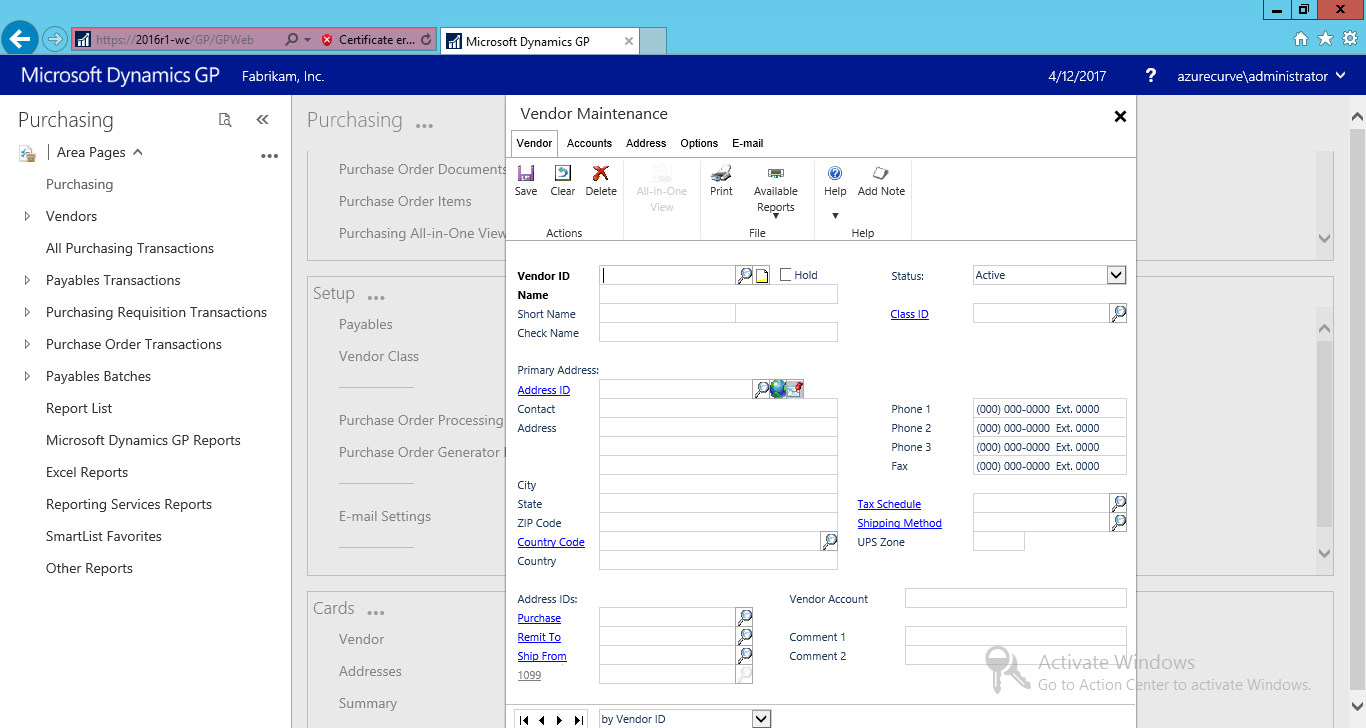 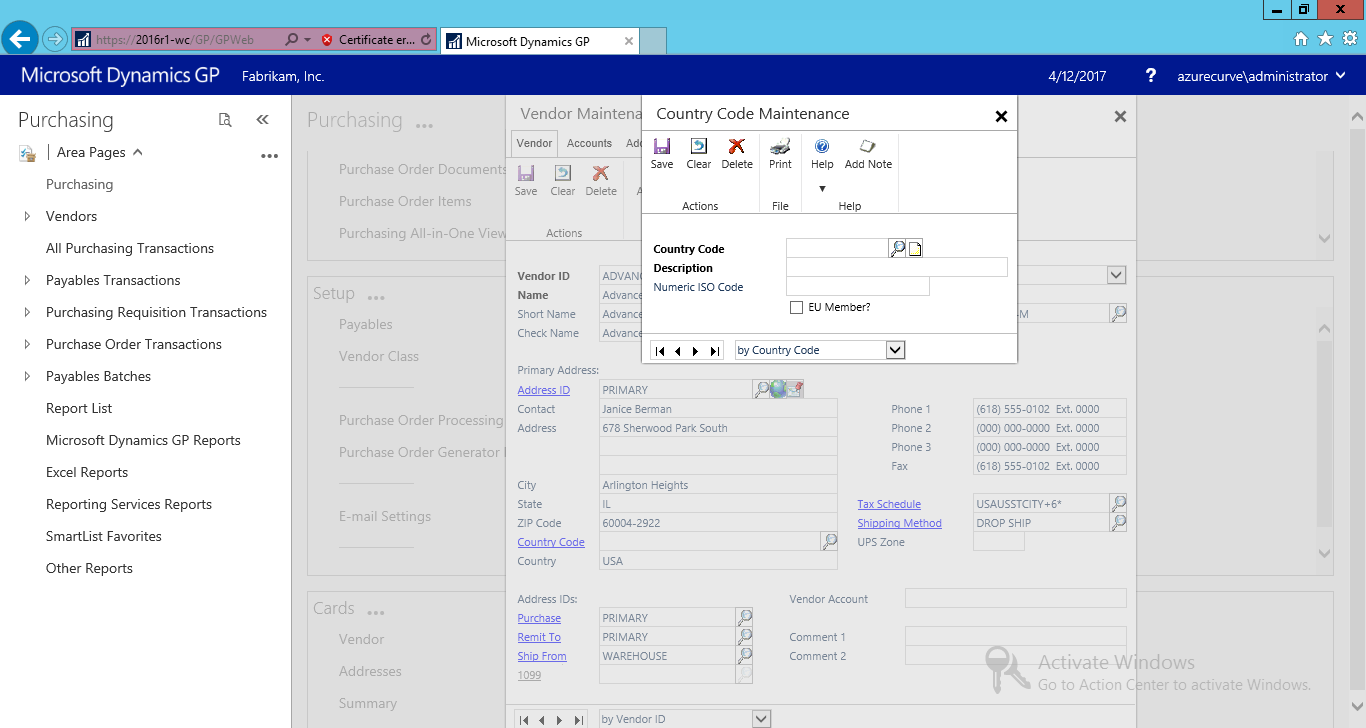 When you do open one window from a drill down the original window is then disabled. To toggle between them you need to use the Search for a Form or Report window: 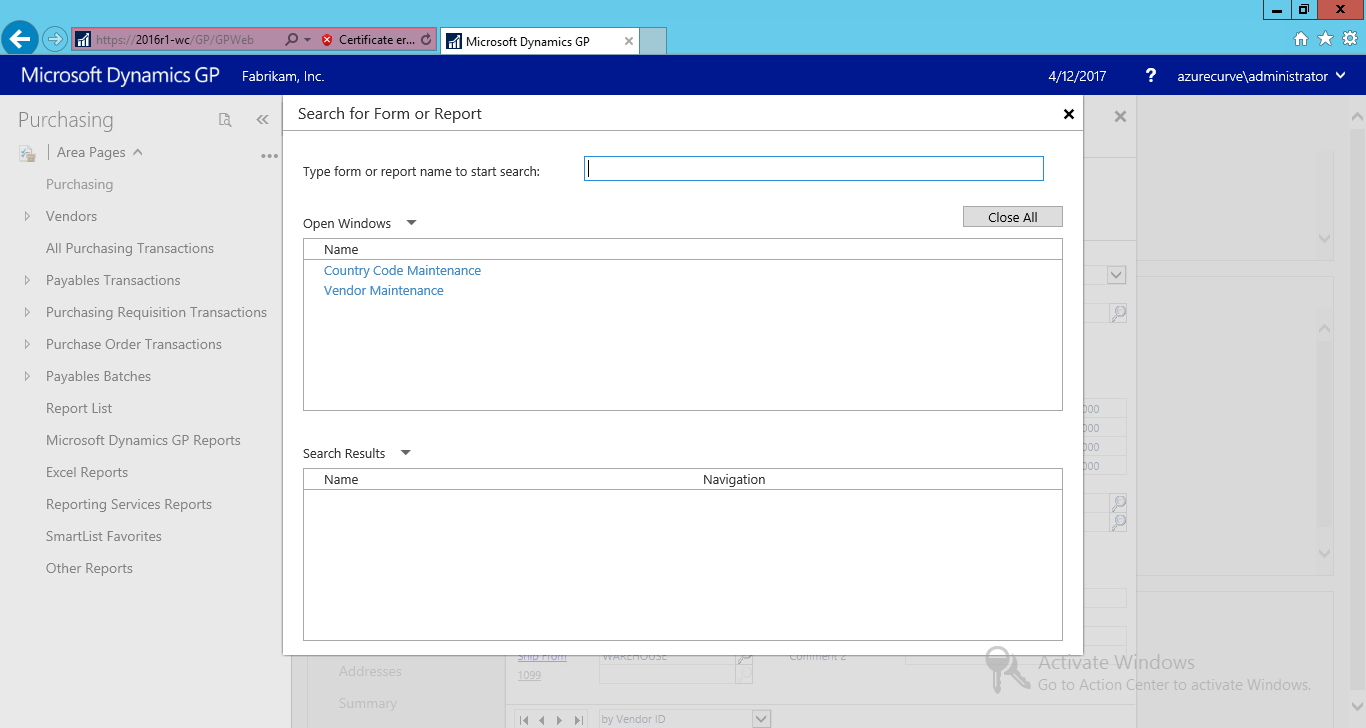 This situation has created a bit of an outcry at Microsoft asking that they do further work to allow multiple window to be open at the same time. There is a post on the Microsoft Connect site where you can vote on this issue and impress upon Microsoft the importance that a resolution is found for this issue. You can vote here.

One of the main issues with the approach Microsoft have taken is that some ISV products rely on having more than one window open at the same time; another is it can seriously interrupt your workflow by being restricted to one window. Imagine, you’re half-way through creating a new vendor card when a customer rings up with an invoice query; you’d need to close the Vendor Maintenance window to open the Transactions by Debtor one.

More information on this issue has been posted by MVPs David Musgrave and Beat Bucher.

When you navigate to the GP app on the web server there is no apparent difference between the Microsoft Dynamics GP 2016 web client and the previous version; in both cases you need to login using your Domain Account: 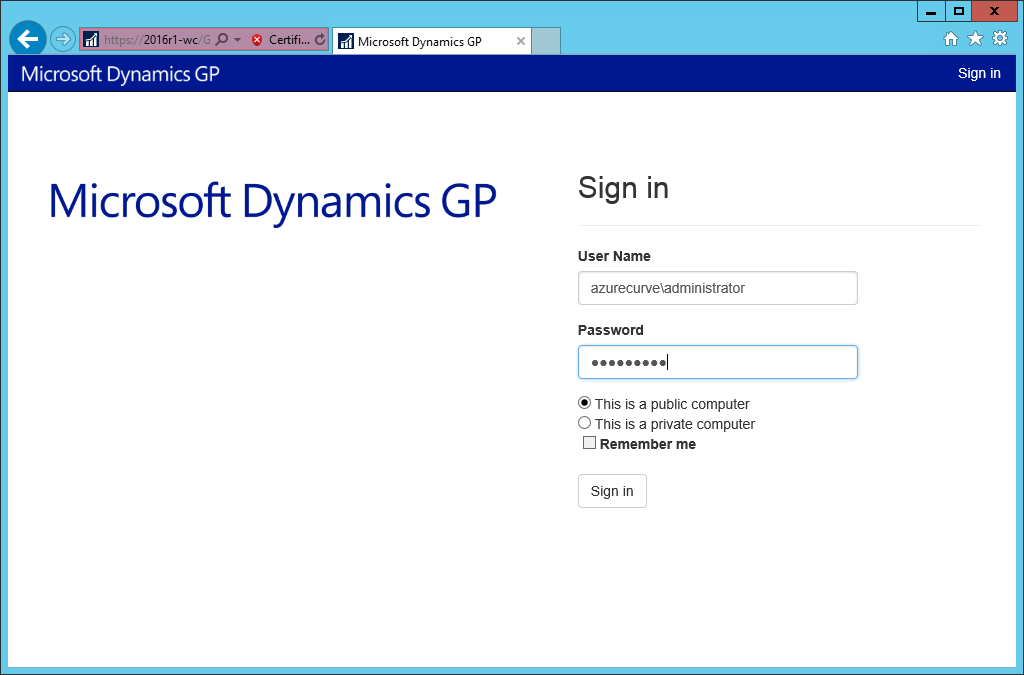 END_OF_DOCUMENT_TOKEN_TO_BE_REPLACED

The second of the wizards which pops up after the web client has been installed is the Web Components Help.

On the Welcome step click on Install to begin the installation: 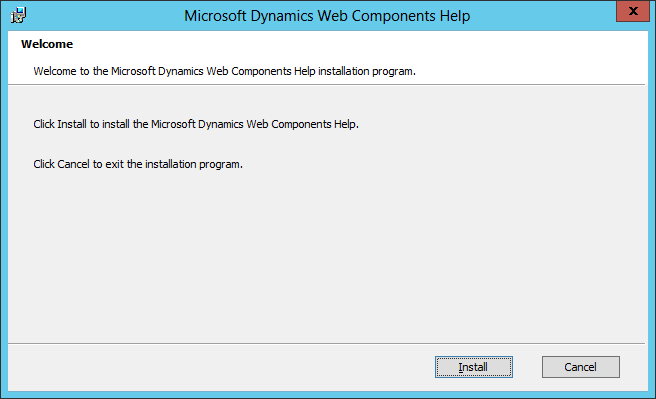