I recently installed SQL Server Analysis Services (SSAS) and used the default settings during the installation. Unfortunately, this meant I installed it using a Deployment Mode of Multidimensional instead of Tabular.

I wanted to avoid uninstalling so I did some poking around and found there is a setting file which can be amended to change the Deployment Mode. The file is msmdsrv.ini which is in C:\Program Files\Microsoft SQL Server\MSAS15.GP\OLAP\Config if you have installed it into the default location: 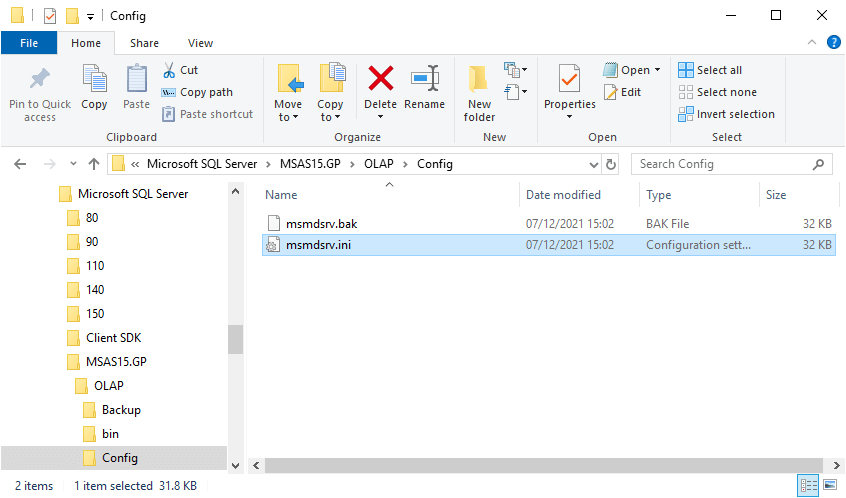 END_OF_DOCUMENT_TOKEN_TO_BE_REPLACED

I was recently doing some testing of a script I created for a client which used SQL Database Mail for sending emails. this was on my one of my demo environments, but I received an error when testing the script:

The solution I found was to grant permissions to public, which did work, but I’m not convinced this would be an approach to take on a clients live system:

I did some work for a client recently which involved creating a report which could be run against any database; we therefore needed to add the user to a database role in all databases which gave access to the relevant SQL objects.

The below script generates a SQL script which can be used to alter the role to assign it to the specified user in all of the Microsoft Dynamics GP company databases.

The script assumes the user already has a server login and that the role exists in all databases:

On a recent project, I needed to create a new database role for some new SQL views which had been created.

Creating the role is easy enough, but to make sure all the relevant views (and there were quite a few) looked like a bigger job until I realised I could select from sys.views and generate the grant script at the same time.

In the below script, the first highlighted section is the database role and the second the start of the views to have select permissions granted (I always use a uv_ prefix for views):

The output of the above should be returned to text and can then be copied and pasted into a new script window.

I occasionally need to make a backup of a SQL table and all rows within; while you can create a table and insert the content, this is the long way of doing. Instead you can use SELECT INTO to both create a table with the correct columns and also to copy the data.

In the below example I am creating a new table suffixed with the date; the first highlighted section is the new destination table to be created and the second the source table:

Usually when installing or upgrading Microsoft Dynamics GP for clients they will use SQL Server Standard and sometimes Enterprise; very rarely, I’ll encounter a mall client who is using or wants to use SQL Server Express.

However, Microsoft Dynamics GP will not deploy reports to SSRS when it is being used with SQL Server Express. if you try you get this error message:

You will also be prompted to supply a username and password, but these will never be accepted. The Microsoft Dynamics GP System Requirements say that Dynamics GP will work with Standard, Enterprise and Express editions of SQL Server, but does not mention the limitation of SSRS and SQL Express.

There are some forums posts and such mentioning the restriction, but thought it worth a post as a general reminder.

I create a lot of SQL objects such as views, tables, stored procedures and so on. If they will be used from within Microsoft Dynamics then they can simply be assigned to the DYNSA role, but if they are for use in custom reporting or integrations then separate security will be required.

Usually for reporting, and especially for integrations, security will be as locked down as possible to minimise any possible attack vector. This can be done in SQL through a security role with only limited security granted to the necessary users.

The first step is to create the role itself; I always do this using a role with a name prefixed with urpt_ so that it can easily be identified as a custom user role:

Then we grant the relevant permissions to the new role. For a report this would mean only granting select permissions on the relevant views and tables; for an integration there may be inserts and updates granted.

For a report, you may need to create a database user for the user or AD group:

The final step is to assign the role to the relevant users or AD groups:

I was doing some work with a client recently and they had an issue with some data in SQL Server which they needed change, but weren’t able to do it through the application.

The issue was that they had some names in a column marked as a key field which contained an apostrophe and it was causing them problems; the data should not have had an apostrophe, but they a user had managed to do it and they wanted to do an update to remove it.

There SQL was a little more limited than mine so they asked for assistance. I created the following SQL as an example for them on how data with apostrophe in can be managed.

The example shows how to insert data containing an apostrophe as well as two ways of changing data; one was doing it globally an the other just changing a specific record.

The key to this is that in Microsoft SQL Server you can use one apostrophe to escape another.

This series will build up through time as I post snippets of SQL Script; I’ll also go back and update some of the previously posted SQL snippets to bring them together into one index.

I had a request to produce a SQl view for a client recently which extracted the first email address from the EmailToAddress field in the Address Electronic Funds Transfer Master (SY06000) table linked to a creditor record in Microsoft Dynamics GP. This field generally stores a single email, but sometimes stores multiple email addresses separated with a semi-colon.

The below script will extract the first email address from the field if it is delimited with a semi-colon or the entire content of the field if there is no semi-colon.