this is an off topic post which I’m posting mainly as a memory prompt for myself. I was working with a set of virtual machines the other day on my test server and received the following error when I tried logging in: 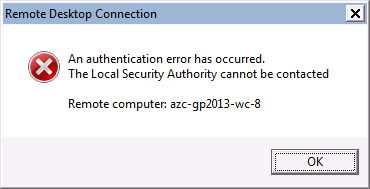 I logged onto the Hyper-V server and launched the VM from Hyper-V Manager and was able to log in without issue. I did some fiddling around and realised that my Domain Controller wasn’t accepting connection requests.

One quick reboot later and I was able to log into the VM without error.

Todays post is the final post in the series on how to install Management Reporter and covers the client installation.

The client installer is part of the same installation package as the server installation (download available here (PartnerSource or CustomerSource login required).

END_OF_DOCUMENT_TOKEN_TO_BE_REPLACED

To quickly recap, the server configuration I am using is four separate servers, all running Windows Server 2008 R2, but could easily be installed on one machine, or virtual machine, for use as a test system;
Domain Controller (DC1) running the ideal domain (a slight departure from my usual azurecurve) on
SQL Server (SQL1)
Reporting Server (RPT1)
Terminal Server (TS1)

The configuration is done using the Configuration Console which is installed as part of the server installation, so in my case it is on the Reporting Server (RPT1).

END_OF_DOCUMENT_TOKEN_TO_BE_REPLACED

With the release of Management Reporter 2012 I thought it might be worth doing a series of posts on how to install this version.

The server configuration I am using is four separate servers, all running Windows Server 2008 R2, but could easily be installed on one machine, or virtual machine, for use as a test system;

All of the installation of Management Reporter server, and the server prerequisites, will be done logged into the Reporting Server (RPT1); the client and initial configuration will be done on the Terminal Server (TS1).

END_OF_DOCUMENT_TOKEN_TO_BE_REPLACED

In some recent posts I’ve covered installing Management Reporter (prerequisites, server and clients) as well as doing the initial setup.

Once Management Reporter has been installed and initialised, typically the next step would be to configure security access and then start creating the building blocks required for the needed reports.

However, if you’re creating a demo system you might instead install the sample reports supplied by Microsoft which can be downloaded from either CustomerSource or PartnerSource (login required) which is what I am going to cover in this post.

END_OF_DOCUMENT_TOKEN_TO_BE_REPLACED

Yesterday, I posted the first in a series of posts on how to install management reporter; how to install Management Reporter – Prerequisites. Today I’ll cover the server side of the installation. END_OF_DOCUMENT_TOKEN_TO_BE_REPLACED

I’ve done quite a few posts on bugs and other problems recently, so I thought it about time to do a few How To posts; I opened last week with a post on how to install a domain controller and I’ve decided to follow up with a post on how to install Management Reporter. Or at least I intented it to be a post about Management Reporter but I then realised how many screenshots I’d taken and decided to break it down into several posts; the first of which will cover the server prerequisites. END_OF_DOCUMENT_TOKEN_TO_BE_REPLACED