With an expected release date of September 2013, the Microsoft Dynamics GP 2013 Financial Management book is to be released.

This is a brand new book focused on financial management within Microsoft Dynamics GP 2013 by me (I’ve been fairly busy this year); 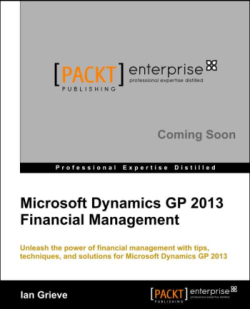 The modules covered in Microsoft Dynamics GP 2013 Financial Management are:

After an initial announcement back in July that service pack 2 for Microsoft Dynamics GP 2013 was scheduled for release in Q4 this year, I am amazed that it was released yesterday. When it was talked about as Q4 I imaged that meant later in Q4 as Errol Schoenfish said there will be a Feature of the Day series running in September so I assumed (which is bad) that this meant the release would follow rather than precede these posts.

The Dynamics GP Support and Services Blog has full details of the new service pack.

The new DVD can be downloaded by Partners or Customers (with relevant PartnerSource or CustomerSource logins).

Or if you want the service pack only, Partners or Customers (with relevant PartnerSource or CustomerSource logins).

When I looked into it I found that the Column Layout in FRx was not set up in a way that the Migration Wizard will translate across correctly, as the FRx Column Layout hasn’t been configured in the recommended way.

The Column Layout was configured with columns for previous years as shown below with a Period Code of 1 To 13 and a Current Per/YTD of YTD;

END_OF_DOCUMENT_TOKEN_TO_BE_REPLACED

Sometimes it is difficult to see the cause of a problem. We’re in the process of upgrading a heavily customised installation of Microsoft Dynamics GP for a client and are installing the new version on a new environment.

When it came to installing FRx I had a bit of a problem. I had installed and configured it on the SQL Server without any problem, but when I installed it on a Terminal Server I ran into the following error; 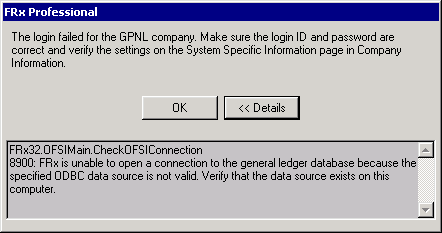 FRx Professional – FRx32.OSFIMain.CheckOFSIConnection – 8900: Frx is unable to open a connection to the general ledger database because the specified ODBC data source is not value. Veryify that the data source exists on the computer

END_OF_DOCUMENT_TOKEN_TO_BE_REPLACED

I then asked one of the clients to try, but she got an error stating “Unable to connect to the LIVE company. The connection to the Microsoft Dynamics GP database failed. Contact your system administrator”.

Well, I logged back in and tried again and was again able to log in without a problem. A little more exploring and I was able to establish that only when I logged in as the sa user was I able to run Management Reporter without a problem.

This is not an error I have seen before so a little investigation determined the problem is because I configured the Management Reporter Data Mart Connector I had used the machine name as the connection to the server, but the client machines are configured to use the CNAME alias in the ODBC connection instead of the machine name.

KB Article 2737852 outlines two methods of correcting the problem. The first is to change the client machines ODBC entry to match that used to configure the Data Mart and which I did not want to do as it was set up so passwords would not need to be reset if GP was moved to a different server.

The second method is to edit some data in the Management Reporter database to change the GLEntityConnectionInformation column so that it matches the ODBC on the client machines. This is the method I opted for and, after making the change, the client confirmed she was able to access Management Reporter.

I’ve been a bit quiet on the posting front recently because my second book is in the later stages of the publishing process and I need to review and respond to feedback from the editors at Packt Publishing.

To do this we’ve been emailing drafts of the chapters to and fro. And (again) this morning a feature of Outlook.com saved me from looking slightly silly when I replied to an email intending to send back an updated draft, but clicked Send without actually attaching the file;

Send without attachments? Just checking. It looks like you’ve mentioned attachments but haven’t added any.

I was presented with the above message. Clicked Go back, added the file and sent the message.

I’ve talked to various people who dislike this type of message, but I really don’t see the problem with it. I’ve only ever been presented the message when I have meant to attach a file and forgotten; I’ve never received it for a false positive so I quite like it. I wish Outlook 2010 had it (or perhaps it does and I just don’t know where the setting is.

A couple of days ago , the Dynamics PTS blog announced the release of Management Reporter 2012 Rollup 6.

This rollup has a range of new features including:

Partners can get more information here and download RU6 here.

Full details are available on the Dynamics PTS blog.

A client reported an issue the other day with figures being incorrect in Management Reporter when compared to the equivalent report in FRx and also to the figures in Microsoft Dynamics GP (which matched FRx).

I think the original cause of this problem is that when the calendar for the current year was created, there was a gap accidentally left between the end of last year and the start of the current one. This was fixed and a reconciliation run in GP, but this did not allow the data to be trickled out into the Management Reporter Data Mart.

In an attempt to resolve the issue, I removed and re-added the Data Mart (deleting the DDM database between removing and re-adding) using the Management Reporter Configuration Console, waited for the initial extract and ended up with figures that were even more different to FRx; a slightly worrying moment I have to admit.

I checked the version and discovered the client was running Management Reporter 2012 RU4 which is known to have an issue populating the DDM database during the initial data extract. Fortunately, Microsoft Support KB 2831693 details how transactions posted from the open years in Dynamics GP are not included during the initial data load and links to the hotfix for RU4 which resolves this problem.

I again removed the Data Mart, deleted the database, installed the hotfix and added the Data Mart back and, after the initial data load completed, all of the data needed to make the report match both GP and FRx was present.

A client logged a problem which I needed to look at through the GP 2010 client, so I logged onto their server and ran up GP.

Or at least I attempted to. After double clicking the Desktop shortcut I received the following error message;