In this series I am taking a look at how macros can be used to update data in Microsoft Dynamics GP.

I am using an Excel spreadsheet with two columns, USERID and PASSWORD. I am going to add a third column to the spreadsheet to hold the formula containing the macro.

Due to the length of the macro, I can’t just add the macro to the formula as is (Excel only allows strings of 255 characters in a formula, so instead I will use the CONCATENATE function and break the macro down into smaller chunks.

In the formula, I have added the cells into the formula to replace the User ID, Password and Confirm Password variables:

When dragged down through all rows containing data, a valid macro is produced for each line:

The resulting macro can be copied and pasted into a Notepad file, but each row will be wrapped with double quotes; to fix this problem, which would prevent the macro running, before saving the file, perform a global find and replace for ” and replace with nothing: 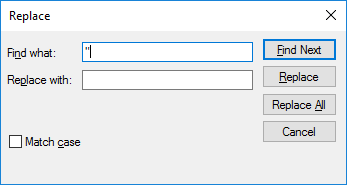 The macro file can now be saved and run.

As with macros produced via SQL script, the Excel formula can have conditions built in; this can allow the macro to handle variations in the steps taken.

I have used this method recently when doing some work with a client to update Extended Pricing in the inventory module. The price lists being updated had a variable number of lines on and the macro had to deal with this as well as catering for for a variable number of price breaks within the lines.

This resulted in a fairly complex formula, but worked well and allowed the client to make the required updates. And will be used again going forward whenever prices need to be updated.