Once Windows 8 finished installing it booted into a Metro configuration screen where I filled in the Computer Name, Connected to the wireless network, and had an option for Express or Customized settings; I just wanted to get to the good stuff so went Express. Maybe over the weekend I’ll redo this and try the Customized settings (I wish after picking English (United Kingdom) it allowed me to Customise my settings).

The next step, and slightly unusual, is to setup a Log on by entering a password to create a Windows Live account; I already have one but no option was easily apparent to use an existing one. I entered my current Windows Live ID to see what would happen.

Well, it recognised it as an existing Windows Live ID and prompted for the password and moved to ‘Finalizing your settings’ (couldn’t it finalise my settings?).

It’s definitely logged into Windows Live as it’s pulled back my full name.

Also just noticed it’s all green instead of blue as Microsoft have traditionally done. BSODs are still blue though; I tried installing it into Windows Virtual PC earlier and got one.

Once all preparation is finished it loads up the Metro UI (a brief flicker of Windows 7 style desktop on the way in); 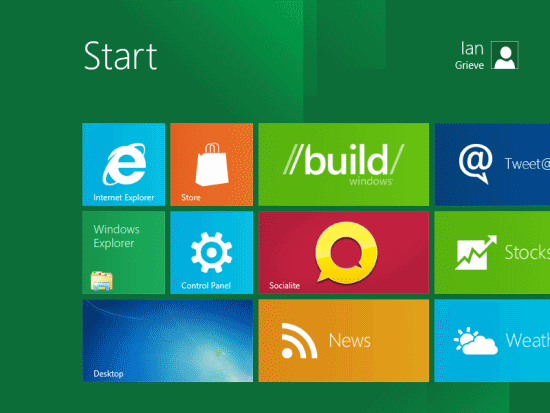