Last Friday the Dynamics GP Service and Support blog announced that the first Service Pack for Microsoft Dynamics GP was available for download.

Service Pack 1 can be downloaded from the following pages;

Unfortunately (well, fortunately if truth be told), the time has come for another enforced posting hiatus for me. Following my illness and emergency surgery in October last year, I am going back into hospital for follow up surgery tomorrow and will not be working or blogging for a time after while I recover.

Knowing myself pretty well, I’m sure I’ll get bored fairly quick, but Mark Polino has the antidote to any boredom with the release of his new book, Building Dashboards with Microsoft Dynamics GP 2013 and Excel 2013; 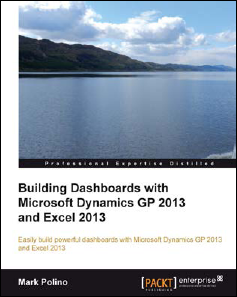 END_OF_DOCUMENT_TOKEN_TO_BE_REPLACED

If you’re a regular visitor to my blog, you’ll be aware that I have been doing a detailed review of Leslie Vail’s book Developing Microsoft Dynamics GP Business Applications; 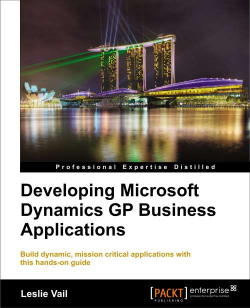 I sometimes feel that in my reviews I may be coming across too critical. If so, I apologise because I actually think the book is really good and I have a lot of respect for Leslie and her contributions to the Dynamics community.

END_OF_DOCUMENT_TOKEN_TO_BE_REPLACED

I’ve taken a look at the list and read the clarion calls from Mark Polino, Leslie Vail and Jivtesh Singh to vote for David Musgrave (the man behind Developing for Dynamics GP and the incredibly useful Support Debugging Tool). I have done so and would encourage other people to consider casting your vote for him as well; he can be found on page 4.

I have many other outside work items competing for my time at the moment which, combined with being busy at work is leaving me little time for reviewing. To that end I’m snatching an hour while sat at a hotel in the Midlands (South Yorkshire to be exact) to add another part to my review of Leslie Vail’s book Developing Microsoft Dynamics GP Business Applications published in October by Packt Publishing;

END_OF_DOCUMENT_TOKEN_TO_BE_REPLACED

With an expected release date of June 2013, the Microsoft Dynamics GP 2013 Cookbook is to be released.

So, in June this year the Microsoft Dynamics GP 2013 Cookbook by Ian Grieve and Mark Polino will be released; 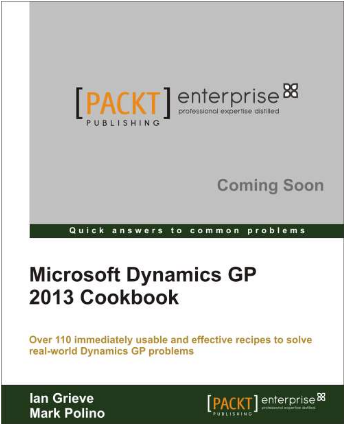 You can pre-order the Microsoft Dynamics GP 2013 Cookbook direct from Packt Publishing.

I started reviewing Leslie Vail’s book, Developing Microsoft Dynamics GP Business Applications, which was published at the end of December by Packt Publishing, a few weeks ago. To do this review I decided to take a read through and complete all the examples she gives on developing an application as I’ve only had very limited experience with Dexterity;

Today, it is time for part 5 of my review where I look at Chapter 6: Deploying a Dexterity Solution where Leslie covers the following key topics:

This chapter has a fair bit of explanatory text covering each of the key topics.

END_OF_DOCUMENT_TOKEN_TO_BE_REPLACED

Over the last few posts, I’ve covered the installation of the Web Client Runtime, added the IIS role, created a self-signed certificate, installed the Web Client, ran the Configuration Wizard, and installed the GP Resource Web Cache. Now it is time to run the Web Client for the first time to ensure required components are installed on a client; I’m installing a new demo machine so I know one component won’t be installed.

Navigate to the address if the site hosting the Web Client. In the case when you have a self-signed security certificate (which I would only advise for demo or test systems) you will be presented with a warning that the site may not be safe; this is the one time I will recommend to someone that they go against the browser’s advice and click Continue to this website (like my credit card company, MBNA, who have a site with an invalid certificate, going on for six years now, and have the security team advise people to accept the invalid certificate and proceed); 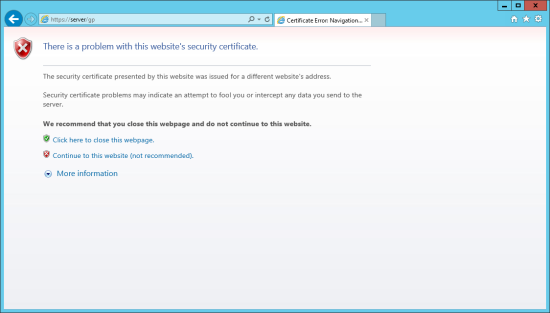 END_OF_DOCUMENT_TOKEN_TO_BE_REPLACED

I started reviewing Leslie Vail’s book, Developing Microsoft Dynamics GP Business Applications,which was published at the end of December by Packt Publishing, a few weeks ago. To do this review I decided to take a read through and complete all the examples she gives on developing an application as I’ve only had very limited experience with Dexterity;

Today I’m taking a look at Chapter 5 which covers sanScript and how to add it to windows to enable the required functionality. The key topics to be covered are:

END_OF_DOCUMENT_TOKEN_TO_BE_REPLACED

The ebook giveway was in association with the publisher of the book, Packt Publishing.

Thanks very much all who entered, but unfortunately there could only be three winners who have now been contacted by Packt on the email address supplied with their entries in the giveaway.

The winners are (in no particular order, beyond ladies first);

For those unfortunate not to win, you can purchase Leslie’s book either direct from Packt Publishing or via Amazon:

Thanks again to those who entered.