It’s important to note that Dynamics GP 2016 is out of mainstream support in July 2021 so that version will not receive any further year-end updates for regulatory changes, so you will need to organise an upgrade to the latest version next year.

A client reported a problem with workflow approvers opening the batch edit list on a Microsoft Dynamics GP General Ledger Batch Approval workflow action email this morning; only a few users are having problems while everyone else is working without problem. The users with the problem are getting this error when trying to open the Transaction Edit List report on the email:

I did some research and found there was a recent post on the Dynamics GP Support and Services Blog where they covered this same issue. The blog post was only four days ago and they acknowledge the issue is ongoing and offer the workaround of downgrading Microsoft Office to work around the issue (I did this recently when sending emails using MAPI caused Dynamics GP to crash).

The problem does not just affect the Word template reports from Workflow Batch Approval emails, but also the Word templates used for sending purchase or sales orders, remittances and so on. For the non workflow Word templates, you could reconfigure the templates to use PDF, or one of the other formats, instead of Word, but, unfortunately, this option is not available for the batch edit lists.

Following the initial report, we’ve had a number of other clients report the issue, so it may be worth preempting problems and block Office updates for Dynamics GP users until a fix is in place from Microsoft.

A client has recently been working on a project to implement approval workflows in a few modules of Microsoft Dynamics GP, but had an issue with the Payables Transaction Approvals notification emails not always including the Word template which all of the steps are marked to include.

There appeared to be no pattern on which approval emails either did or did not include the Word template; a user would receive the Word template on to emails, then not on the third, but again receive it on the fourth.

Doing some searching online found a post by Rob Klaproth of Armanino where he had the same issue and confirmed that there is a known issue logged with Microsoft whereby when the user submits a document for approval, and clicks submit on the comment box before the Word template has finished generating the email will not include the Word template.

This issue affects all of the edit list Word template attachments through all of the Workflow approval types.

I was onsite with a client a while ago helping them create new Citrix XenApp Gold Build Servers. When users were testing, they encountered the following error when generating remittances:

END_OF_DOCUMENT_TOKEN_TO_BE_REPLACED

The twenty-third new feature is Email POP PO Other Form. This feature makes the Purhcase Order Other Form available for email.

Microsoft Dynamics GP 2013 saw the introduction of the ability to reprint the check remittance report. This feature was a very nice one to see, as numerous clients, if not all of them, had been asking for.

At some point after this, and I am not sure in which version, the ability to email the reprinted remittance was introduced: 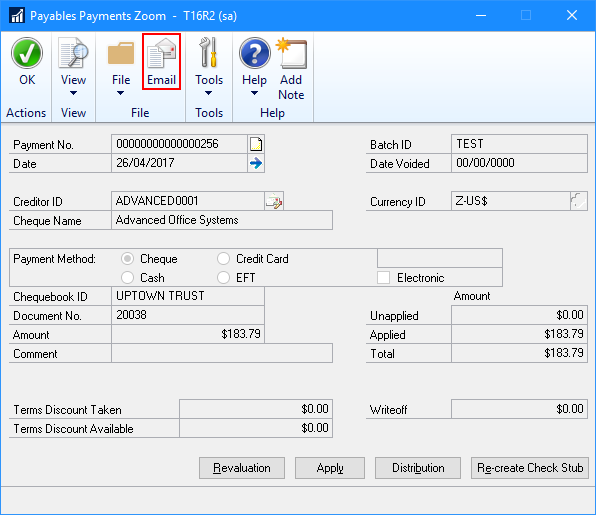 END_OF_DOCUMENT_TOKEN_TO_BE_REPLACED

This time, the enhancement is a twofold one. Firstly, the Batch Edit lists have a default Word Template and, secondly, this can be emailed to the workflow approver: 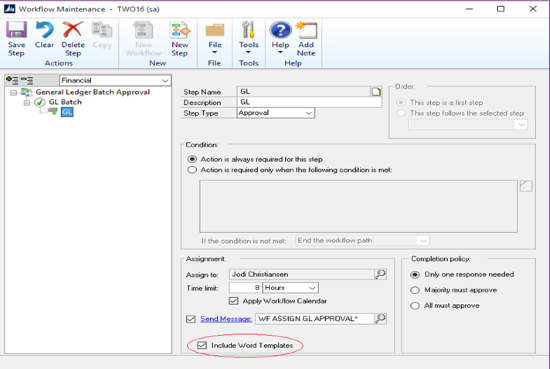 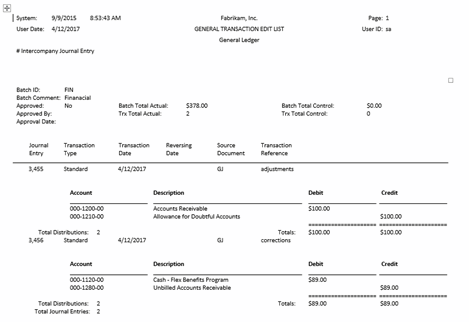 The main features of are:

I’ve been involved with a recent upgrade of Microsoft Dynamics GP 10 to 2015. Two of the new features we helped introduce is the use of Word Templates and the Email Documents to replace the old statement email functionality which was dependent on Adobe Writer.

To help the client make the transition from the old to the new, I created an SQL script to transfer the email addresses from the table, RM00106 (RM Statement Emails) used by the old Adobe Writer to the SY01200 (Address Email Master) used by the Email Documents functionality.

END_OF_DOCUMENT_TOKEN_TO_BE_REPLACED

We had a peculiarity the other day when updating a Word template for a client. We added some new fields via Report Writer and then created a new Word Template; when then modifying the Word template the fields usually show in the XML schema, but this time we found they weren’t.

After a couple of fruitless minutes checking the modified report and creating a new version of the Word template without success I started wondering about already open applications. In particular MS Word itself was already running with an unrelated document open.

This is something I have experienced before without being able to pin down why which caused..shall we say…a certain level of frustration. I’m not sure why having Word open caused the XML schema not to be refreshed when creating a new document, I am pleased that at least I can void the problem by making sure all open instances of Word are closed before starting.

I recently assisted a client with an upgrade of Microsoft Dynamics GP 10 to GP 2013 R2. As part of the upgrade we assisted the client to create some Word Template versions of sales invoice, purchase order, and cheque remittance (or check remittance to the American readers).

Everything appeared fine during development and initial testing. Fine that is until we tried producing a batch of twenty remittances which produced the following two error messages:

Microsoft Word – The file Check Remittance~2 cannot be opened because there are problems with the contents.