If users are not posting invoices, this KB article shows all of the tables which need to be cleared down.

This came up for a client recently. The above KB article requires all users to be out of the system to clear the tables down. In the middle of the working day we wanted to avoid this if we could; so we checked the Batch Activity (SY00800) table and were able to identify the user locking the process and get them to log out.

Leaving the Dex… tables alone we then tried the Reconcile utility again and found it worked fine. In many cases, all three tables will need to be cleared, but sometimes just the SY table will be sufficient. 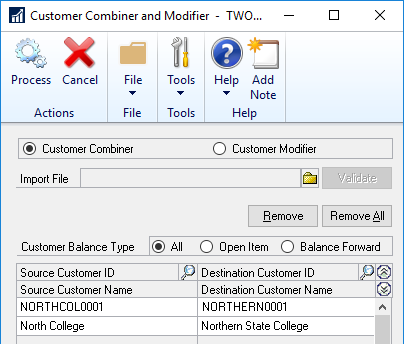 I’ve tested this feature and compared it to the functionality in 2018 RTM, and I can’t tell the difference. The Ship To address of the destination customer, does not change in either version and the ship to address from both the source and destination customers are both available after the combine.

The twenty-fourth Feature of the Day is Ship To address retained by Customer Combiner.

When using the Customer Combiner tool to combine two customer records the ship to address will now be retained: 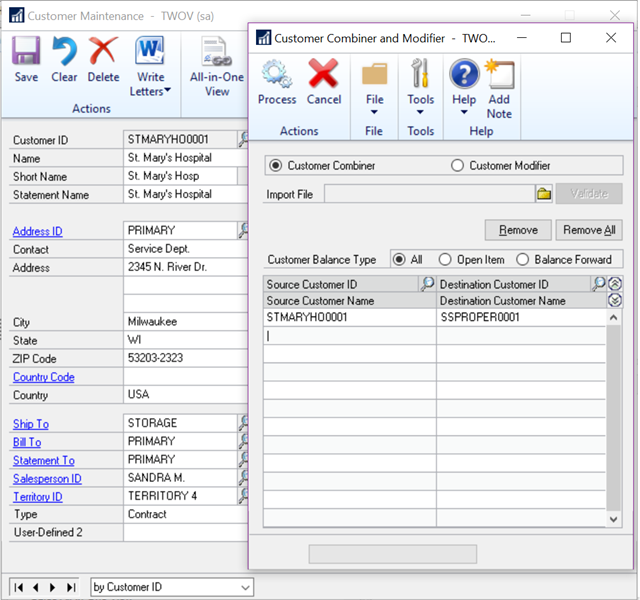 While Customer Combiner isn’t generally used that much (at least by my clients), keeping the ship to address could potentially be very useful.

We are currently in the process of upgrading a large 20 site client from Microsoft Dynamics GP 9 to a later version (unfortunately not 2015 due to third party add-ons which are not supported on this version). The client previously had standalone implementations at each site, but we are aggregating them into one implementation for ease of maintenance and also to reduce licensing costs.

The first few we centralised went fine, but we then ran into problems when we did the head office companies. When they ran the GL Summary TB on the old and new systems there was a mismatch between them.

After investigating, the support team established that the problem was down to some corruption in the Account Index Master table (GL00105) where some of the accounts had segments separated with dots instead of dashes as defined in Account Format Setup (Administration area page » Setup » Company » Account Format).

The solution they followed was fairly simple, and in three steps:

After this was done, the report produced from the upgraded system matched the old one.

The thirty-third Feature of the Day covered is OLE Notes Migration Utility. The ability to attach documents to record level notes has been available in Microsoft Dynamics GP for a long time. The record notes were always stored as OLE attachments until now; in Microsoft Dynamics GP, the OLE Notes have been replaced with the Document Attachment functionality which stores the notes directly in the Microsoft SQL Server Database.

To facilitate this, a Migration Utility, which runs as a separate application, can be obtained from PartnerSource/CustomerSource. The utility will allow existing users to migrate the files that have already been attached to Notes using the existing OLE functionality into the new Document Attach functionality: 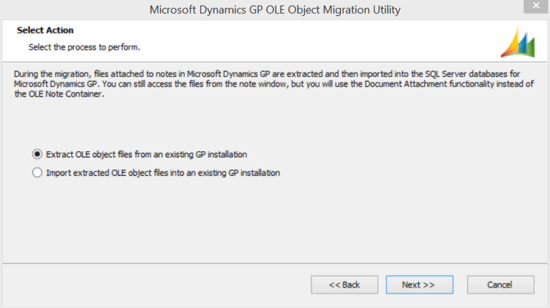 I’ve never liked the OLE Attachment available in record level notes; if one client had a different path defined in the ini file and the user opened and saved a window the attachments then they would get corrupted. Using Document Attachment functionality removes this risk of data corruption and provides functionality which is much more robust.

This feature is targeted at the following roles:

He somehow slipped it out without me noticing, but David Musgrave of the Developing for Dynamics GP blog released Support Debugging Tool Build 17 before Christmas; this is the build which added support for Microsoft Dynamics GP 2013.

He was back yesterday with a hotfix release to fix a couple of issues.

Partners can download SDT from PartnerSource (login required); if you’re a customer you’ll need to contact your partner to obtain it for you.

David has links to SDT for Microsoft Dynamics GP 10 and 2010 here.

In this post I’m stepping away, briefly, from Microsoft Dynamics GP but will return in to it in my next post.

Microsoft have recently released a raft of new versions, including Microsoft Dynamics GP 2013 and Management Reporter 2012 Rollup 3, and to test I’ve been installing a few new virtual machines with Windows Server 2012 and have also updated a couple of machines with Windows 8 and, because they’re new machines without DVD players in them, to do this I used the Windows USB/DVD Download Tool which is available for free download from the Microsoft CodePlex|Project Hosting for Open Source Projects site in order to create a bootable USB drive. [Updated link on 20/4/2019 as CodePlex has been closed.]

I thought a step by step guide for others needing to install Windows 8 (or other version of Windows) might be of benefit. So after downloading the utility from the above link, double click the downloaded setup file to install the Windows 7 USB/DVD Download Tool Setup Wizard; 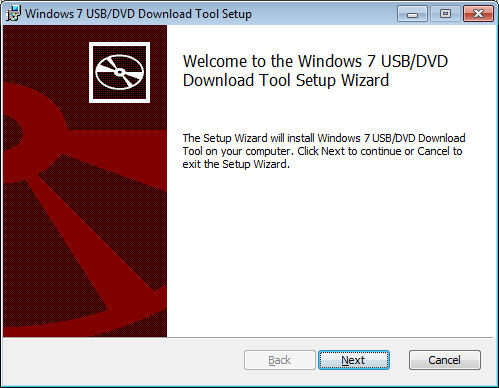