Many years ago I discovered the Opera browser and found it was much better than the other browsers around. Leading edge it usually had features in advance of other browsers and I especially liked the speed dial (a landing page you could add your favourites to for quick access).

Unfortunately, the last version of Opera using their own engine was version 12 released in 2012 and killed in 2013 when they switched to Chromium; in this swtch they removed almost all functionality, including bookmarks! Gradually through time, they re-introduced these features as they hemorrhaged users with me being one of them.

I made the switch to Vivaldi while it was still in beta and have nejoyed using it ever since. Founded by one of the original founders of Opera, it follows a similar approach to flexibility and features of Opera 12.

Vivaldi has, today, reached version 3 which includes a built-in tracker- and ad-blocker in both the desktop and Android versions: 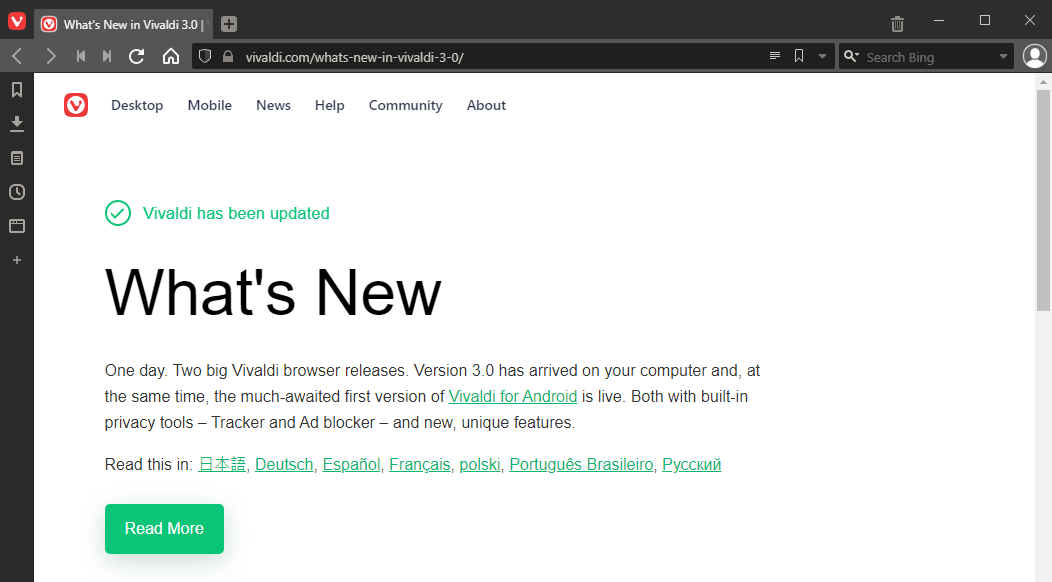 Once I’m out and about again, I look forward to giving both of these a try (especially the Android version), but that may have to wait a while.

Full details of the new release are here.

Full details are here and it can be downloaded from PartnerSource

I will be starting that series tomorrow and will then move onto a series of posts installing the new version. These posts will go-live over the coming days and weeks.

After a couple of RC (release candidate) releases over the last couple of weeks, ClassicPress 1.0.0 “Aurora” has been released.

This is the first version of the hard fork of WordPress to be released; I have previously done a series on migrating from WordPress and am currently part way through a series on installing ClassicPress on a new site.

This version is fully compatible with WordPress 4.9.8, but there have been some changes which are detailed in the release notes.

As I usually do, I’ll be following up over the coming days with a Hands On With Microsoft Dynamics GP 2018 R2 series.

The Microsoft Upgrade Blog Series for Microsoft Dynamics GP 2018 R2 and Year-End Update will give you the information needed for a successful upgrade and answer questions about planning, known issues, troubleshooting, table and column changes in the new version and more. Here is the upcoming schedule:

The Dynamics GP Support and Services Blog will be updated with links to the posts as they are posted, so make sure you check back on that page regularly once the series starts.

I wrote a blog post on Implementing Jet Reports earlier this year. While I was mid-series a new version of Jet Reports was released, Jet Reports 2018 R2.

Jet Reports published a blog post on the new features and there are some quite nice ones included.

Details on all of the changes are available on the Jet Reports blog.

I’ve been checking all day, but, finally, the download for Microsoft Dynamics GP 2018 RTM is now available.

You can download it from here (CustomerSource or PartnerSource login required).

You can read about the new features coming in my Dynamics GP 2018 RTM Feature of the Day series of posts.

The Support team will be running a New Feature series of posts starting on 5th December. These blogs will give a comprehensive overview of the features along with excellent content, documentation, and videos, as they have done in the past.

I’ll be going hands on with the new version in a series of posts, probably starting as soon as the download is finished; the posts will start with the installation of the new version, before moving onto covering the new functionality.

On the 1st of December, Microsoft Dynamics GP 2018 RTM is due for release. I am, as I usually do, running a series of “Hands On” posts where I step through the installation of Microsoft Dynamics GP and additional products and then will move on to taking a look at the new functionality which has been introduced.

These posts will be posted over the coming days and weeks, and may be interspersed with posts on other subjects, so make sure to check back regularly.

END_OF_DOCUMENT_TOKEN_TO_BE_REPLACED

This blog post series is from the Dynamics GP Support and Services Blog which usually covers in depth the new features after launch; usually there is a series of posts by the Inside Microsoft Dynamics GP blog which precedes the launch of the new version which I am still hoping will happen this year.

There are five key areas of new functionality in Microsoft Dynamics GP 2018:

I’ll not list the detailed schedule, but the new features blog series will run from 5th December through to 15th February.