Before running the migration plugin, it’s recommend to make a complete backup of your site; both files and database should have a good backup made. This isn’t particular to migrating to ClassicPress; I make the same recommendation for any process which is going to impact on files and/or database.

By a good backup, I mean verifying that the backup has worked (e.g. all the expected files are downloaded and the database backup file contains the relevant tables. Without this you won’t be able to restore in case of need.

I mentioned yesterday that the ClassicPress migration plugin was not ready yet for WordPress v5, but was coming soon.

Apparently I should have waited a day and posted today, as the migration plugin is now supported with WordPress 5.

With the migration plugin installed, the next step is to complete the site migration.

The activated plugin is available from the Tools menu in the sidebar; select Switch to ClassicPress:

END_OF_DOCUMENT_TOKEN_TO_BE_REPLACED

With the migration plugin downloaded, the next step is to install the plugin.

To do this, log into your WordPress site’s admin panel and select Plugins from the navigation pane and then click the Upload Plugin button at the top of the page, next to the Add Plugins header:

END_OF_DOCUMENT_TOKEN_TO_BE_REPLACED

In the last post, I downloaded the migration plugin. If the site you’re migrating is on WordPress 4.9.x then you are good to proceed; if your site is on WordPress 5, then you’ll need to wait a little time.

ClassicPress are about ready to release a version of the migration plugin which will allow migration of a WordPress 5 site. Once this updated plugin is released, all WordPress sites could be migrated to ClassicPress.

The easiest way to migrate an existing WordPress site to ClassicPress, is to use the ClassicPress migration plugin available from here: 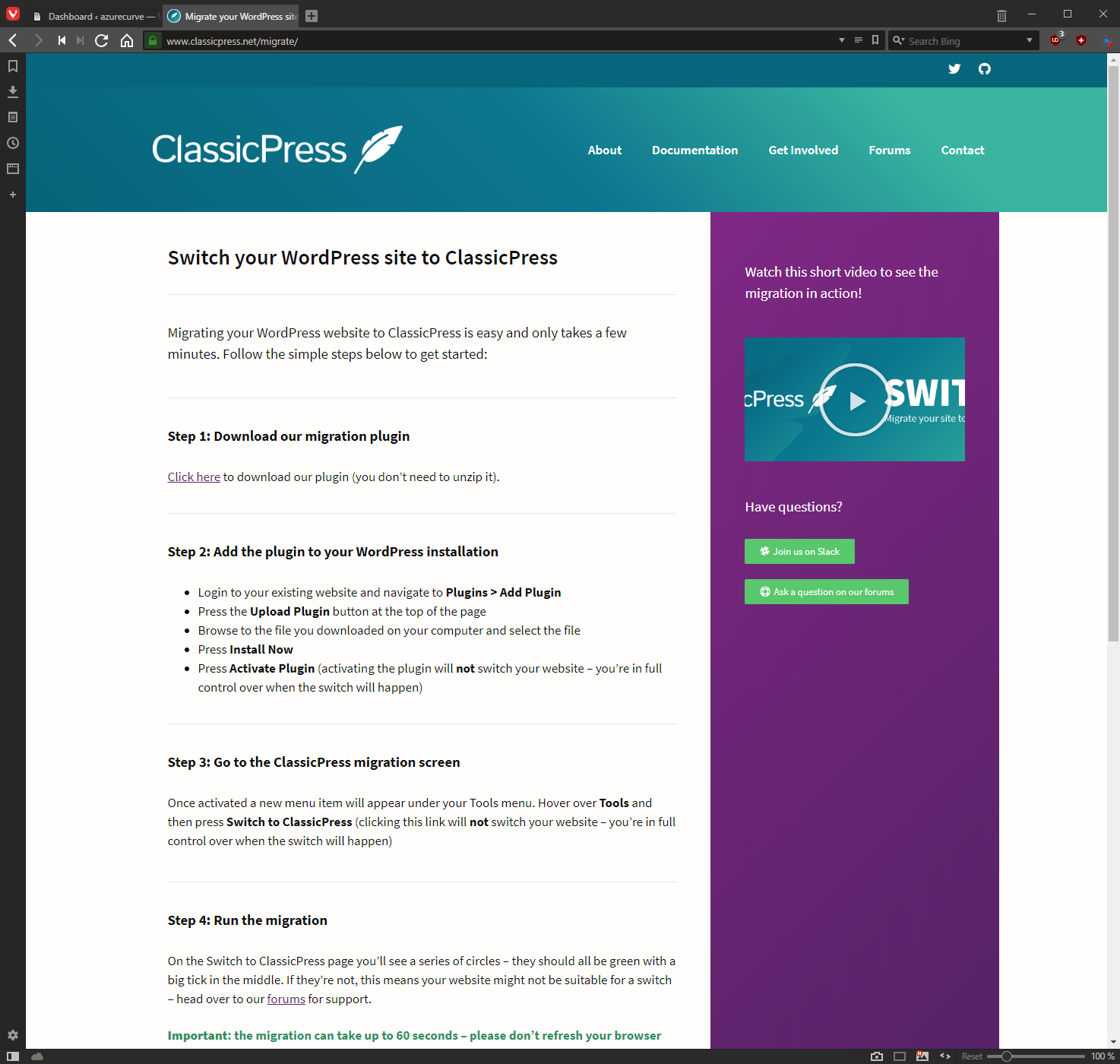 The file downloaded is a zip file, but, as the download page says, this does not need to be extracted; the zip can be uploaded directly via the WordPress plugin upload function.

As mentioned in the series index post, ClassicPress is a fairly recent fork of WordPress which has announced itself as ready for use on live sites. Initially as a response to the inaccessible Gutenberg, they are now positioning themselves as a CMS business-focused CMS which is .

From the About ClassicPress page, ClassicPress styles itself as a community-led fork of the WordPress content management system who wants to get back to basics and focus on open dialogue and democratic decisions. This is reflected in the mission statement and the Petitions site.

Like WordPress, ClassicPress is released under the GNU General Public License version 2 (GPLv2) (or later) license from the Free Software Foundation.

I’ve been a user of WordPress for almost 8 years and have been developing plugins for WordPress for quite a while. I’ve known about Gutenberg for a while, but only really delved into it farily recently.

If you’re hearing about it now for the first time, I did a post recently which might be useful: What is Gutenberg (for WordPress)?

One of the other issues with the development of WOrdPress, is the lack of transparency and development direction which appears to be completely controlled by Automattic. WordPress.org is, in theory, the independent open source project. However, the creation of Gutenberg appears to have been decided upon and drbvien by Automattic to benefit Automattic’s wordpress.com site.

The ethos of ClassicPress, is that the community will decide the development direction by way of the Petitions site.

ClassicPress v1 is fully compatible with WordPress 4.9.x and will remain so; ClassicPress v2 will potentially start to diverge from WordPress, but this will be by the petitions logged and voted upon by the community.

ClassicPress appears to align better to the type of sites I run, and the democratic structures for development offers the best opportunity for this to continue to be true going forward.

ClassicPress is a fairly recent fork of WordPress which has announced itself as ready for use on live sites. Initially as a response to the inaccessible Gutenberg, they are now positioning themselves as a CMS business-focused CMS which is a modified and enhanced version of WordPress (without Gutenberg) that serves the business website market.

In this short series of posts, I’m going to take a quick look at what is involved in migrating an existing WordPress site to ClassicPress.

ClassicPress is a modified and enhanced version of WordPress (without Gutenberg) that aims to serve the business website market; the concept of this fork was launched by Scott Bowler. I’m not going to try to speak for Scott, so I’ll link to the original post he did on why ClassicPress was created .

The Mission statement from ClassicPress is:

The original idea behind ClassicPress was to provide a version of WordPress without Gutenberg, a drag and drop page builder, which was slated to become part of the core WordPress code from version 5.

It is our firm belief that the original publishing experience was (and still is) a tried and tested solution complimented by a wide array of plugins to extend its functionality. In other words, it wasnâ€™t broken, so it didnâ€™t need to be fixed.

This philosophy is central to ClassicPress. We wonâ€™t change things for change sake â€“ just because something has been around for a while, it doesnâ€™t mean itâ€™s broken (in fact, itâ€™s probably the optimal solution).

The main target market of ClassicPress are businesses and as such we will move to being a full CMS. Blogs can be a part of an CMS, the other way around is often much more difficult.

The features that we will implement are all focused around offering one of our 3 key takeaways:
Powerful. Versatile. Predictable.

3. We will facilitate democratic discussion and decision making

In order for decisions to made by the community it is essential that we provide a platform that makes it easy for every member of the community to share ideas, debate, vote and give feedback without censorship.

We will ensure the platforms and systems are in place and maintained to make this a reality.

4. We will make peopleâ€™s lives better

There are many people involved in an open source project such as ClassicPress. Programmers, designers, marketers, businesses and website visitors to name a few.

It is our mission to ensure that we make the lives of the people who use ClassicPress better. For example, for programmers we will campaign for ideas that make programming more efficient, less prone to bugs and faster to do. For end users we might suggest a project to make websites load faster.

5. We will invest in the future of ClassicPress

ClassicPress will be registered as a not-for-profit company (a Limited by Guarantee company based in the United Kingdom).

We will be transparent about any money raised (or spent) and encourage the community to vote on how this money will be best used. It is our mission to ensure that we re-invest into the ClassicPress platform and any supporting systems.

In the long-term this might, for example, include hiring of a core team of developers to work on ideas voted for by the community.

I’ve joined the forums and slack channel for ClassicPress and have been both keeping a general eye on things as well as doing some beta testing for various aspects of the project. I’ve liked what I have seen so far and am seriously interested in moving my sites over to it when the first version is released (currently it is in beta).

For me the key item is that it does not contain Gutenberg (they’re open to a Gutenberg plugin that people can choose to use) and it works fine with all of my plugins (both the ones I have created as well as the ones from other developers (such as Contact Form 7).

While ClassicPress is still in beta, James Nylen, the development team lead, has given the green light for the announcement that it is safe to use in a live environment as there are no open bugs on our GitHub repository.

If they’re saying it is ready, but still in beta you might be wondering why?

The answer is quite simple; there are a few items which still need to be completed before the official version 1 launch (none of which will have a negative impact on sites using it):

Full details of the announcement are here.

I’m in the process of building a new plugin demo site on ClassicPress and will be looking to migrate all of my sites over as soon as I can; in the mean time I will be sticking with WordPress 4.9.8 (plus any 4.9 security updates) as I don’t find Gutenberg to be useful (and would go so far as to say it is would have a major detriment on my blogging if i did upgrade and try to use Gutenberg.

For me, ClassicPress is the future and I am participating in the new community where I can (mainly in beta testing of the various aspects).

Click to show/hide the Gutenberg for WordPress Series Index

Gutenberg is coming. Gutenberg is included in WordPress 5 which is slated for release on 6th December 2018. This is avoidable in the short term, by preventing WordPress upgrading or by upgrading and then installing the Classic Editor plugin, but this plugin has been announced as only supported until 31stDecember 2021. After this the Classic Editor will no longer be supported.

At this point you either need to switch to Gutenberg or find an alternative to WordPress.

That alternative might be another CMS, another blogging platform, or a WordPress fork.

I mention that last as a new WordPress fork called ClassicPress has been announced which I’ve been looking into and I think it has possibilities. I’ll have more posts soon on ClassicPress as I continue my investigation.

Click to show/hide the Gutenberg for WordPress Series Index