Microsoft Dynamics GP 2018 R2 was released on the 2nd October. In this series of posts, I’ll be going hands on and installing the majority of the components; some of them, such as Analysis Cubes for Excel, which are little used, I won’t be covering.

The series index will automatically update as posts go-live in this series.

I was going to step through the installation of the Web Services for Microsoft Dynamics GP 2018 R2, but have found that the installer on the media doesn’t work. Selecting Web Services Runtime from the setup utility results in this error: 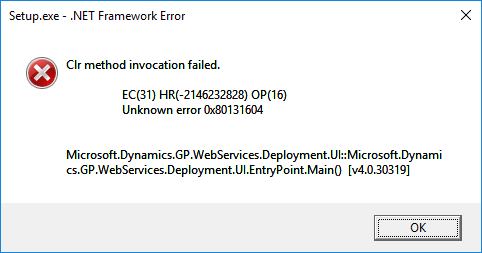 I’ve tried this on four different computers and received the same error on all of them.

I’ve reported this to Microsoft for them to look into; in the meantime, I’ve been informed that there were no changes in R2, so the installer of the RTM can be used; I blogged about installing the Web Services for Dynamics GP 2018 RTM back in December 2017: