Microsoft Dynamics GP 2015 R2 will soon be released (due late May/early June and, as with previous releases, Microsoft have started a Feature of the Day series on the Inside Microsoft Dynamics GP Team blog. As I have done with the last three series, I’ll be reposting these blog posts here with a little commentary.

The fourth Feature of the Day is Analytical Accounting Transaction Lists.

Microsoft have also improved the way the AA dimension code information displays in the lists. In prior releases, the lists contained a single column for the AA transaction dimension code. Thus, if the company is tracking more than one dimension on a transaction, multiple lines were required in the list for a distribution entry.

In GP2015 R2, they have updated the SmartLists and Excel Reports to display a column for each transaction dimension, showing the code assigned for that dimension.

For example, the below SmartList shows how the list would display for a company tracking Cost Center and Project as AA transaction dimensions. 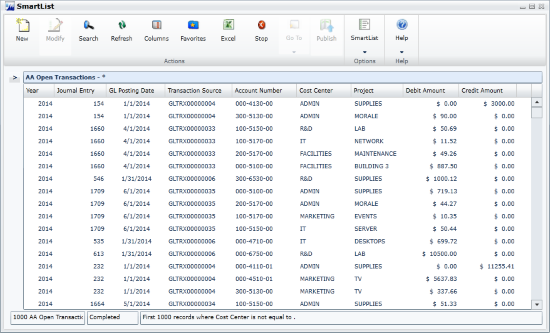 The change in how the data displays improves readability of the report, and also improves the ease with which users can summarize and work with the data in Excel using pivot table functionality.

Analytical Accounting is one of the modules which is not much used, but can add substantial analysis without needing the chart of accounts to be overly complicated.

If you’re thinking of starting to use Analytical Accounting, more information is available in my second book, Microsoft Dynamics GP Financial Management: