Microsoft Dynamics GP 2015 R2 will soon be released (due late May/early June and, as with previous releases, Microsoft have started a Feature of the Day series on the Inside Microsoft Dynamics GP Team blog. As I have done with the last three series, I’ll be reposting these blog pists here with a little commentary.

On the Microsoft Connect website, one of the most requested additions to Workflow was a new Approval Workflow type for Payables Transactions. Well, we asked… and Microsoft delivered. 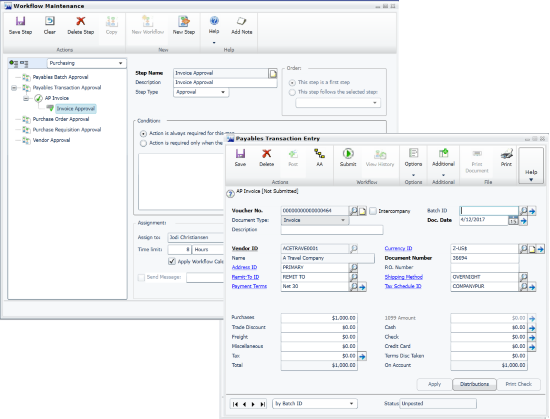 I am really pleased to see this Approval type introduced as we have a number of clients who, when shown the Payables Batch Approval workflow, immediately asked if they could submit individual transactions for approval instead of the entire batch.

This Feature of the Day also proves what I have been telling clients for a while; Microsoft do listen to requests for new features, so if there is something you really want, submit it to MS Connect and let me know so I can both vote for it and also publicise it on this site (while writing this I realised how long ago it is since I publicised something).

I’ll have some news on the Workflow front in the near future so keep checking back (I should have more to tell you within a couple of weeks or so).

Microsoft Dynamics GP 2015 R2 will soon be released (due late May/early June and, as with previous releases, Microsoft have started a Feature of the Day series on the Inside Microsoft Dynamics GP Team blog. As I have done with the loast three series, I’ll be reposting these blog pists here with a little commentary.

This post is the series index which you can use for quick access to any of the other posts. I am a fair few posts behind Microsoft so the posts may come thick and fast until I catch up.

END_OF_DOCUMENT_TOKEN_TO_BE_REPLACED

The second SQL view I’m posting in this series is one which shows the user, the companies to which they have access and the security roles assigned within each company.

azurecurve | Development
has over 50 plugins available for ClassicPress, providing a range of additional functionality.