I’m not sure where I got this image from, but roadmaps for Microsoft Dynamics GP seem to be fairly thin on the ground so I figured I’d do a post. 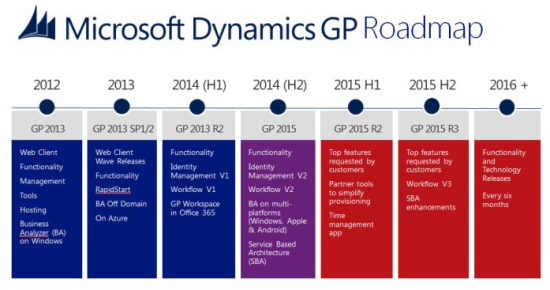 Part of the reason for posting this, is that I have had a few conversations with prospects looking to move to a new ERP who have asked about the future of Dynamics GP and quoting competitors who have talked about doubts of its long term longevity.

This is all FUD (fear, uncertainty and doubt) relating back to the Project Green of 2007/2008 which was a plan to Microsoft to unify their ERPs into one product. It is also a plan that was abandoned back in 2008, but the fact it existed at one point is still used being used by competitors to try to blacken the name and future of Dynamics GP.

As you can see from the roadmap, above, there are plans for fairly rapid releases of Dynamics GP which include much new functionality (including a rewritten Web Client in HTML5 after the 2015 R2 release).

The Convergence conference also saw an announcement that Microsoft Dynamics GP 2015 R2 was due in late May or early June. As the RTM came out at the start of December 2014, this would align with the discussed 6 month release schedule.

Microsoft will soon be releasing details on the new features available in Microsoft Dynamics GP 2015 R2, so keep an eye out for that.