The tenth feature they’ve announced is some enhancements to the Alternative/Modified Forms and Reports window.

This feature covers several enhancements to the window to improve usability. 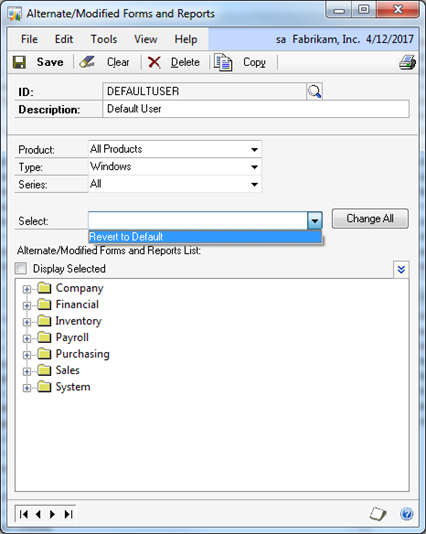 First, a Series option has been added to Product and Type to allow easier selection of windows or reports to change security for while retaining current functionality by allowing the series of All to be selected.

Second, the ability to Mark All or to revert all to the system defaults defined at time of implementation.

Third, a Display Selected option which reproduces the functionality introduced in Microsoft Dynaics GP 2010 in the Security Roles and Security Tasks window where only the items which have been selected are displayed to allow a glance to show which modified forms or reports are in use.

Looking for support or consultancy with Microsoft Dynamics GP?

1 thought on “MDGP 2013 Feature of the Day: Alternative/Modified Forms and Reports”